Keith Jones, a six-time Emmy Award-winning anchor for NBC10 News, stopped by Freehold Township High School to discuss what it takes to become a broadcast journalist.

Mr. Jones, a native of New Egypt in Ocean County, appears on the 5 p.m. newscast on NBC10 out of Philadelphia. Along with anchoring, Mr. Jones has field anchored sporting events for the Eagles, Phillies, 76ers, and Flyers. He has also covered college sports, Super Bowls, and the PyeongChang 2018 Olympic Winter Games.

Students interested in broadcast television were invited to attend the talk with Mr. Jones. During the discussion, he explained what a typical day looks like for a news anchor. Students were surprised to learn that the set is relatively empty during a live broadcast thanks to automated systems and the control room.

After viewing clips from his time covering the 2018 Olympic Winter Games in South Korea, students were curious about his visit to the demilitarized zone on the border between North and South Korea. Mr. Jones said it was a surreal experience, one he is not likely to forget. Other questions included how he learned to be comfortable in front of the camera. His advice to the students on that topic was to prepare, slow down, and don’t be afraid to use notes. Those in attendance learned a lot about what goes on both in front and behind the camera.

Since 2013, Mr. Jones has served as an adjunct professor of Broadcast Journalism at Villanova University. In 2018, he received Villanova’s Young Alumni Medal, which is given annually to one alumnus who has made outstanding contributions to one or more areas of society, including professional, academic, and service to the college.

In 2014, he was honored with the school’s annual Ethos Award, which recognizes an alumnus who serves as a role model to students by demonstrating character, service, and excellence in the field of Communication. The same year, Mr. Jones was awarded the University’s annual Young Alumni Medallion, given to an alumnus who’d graduated within ten years, excelled in his or her professional endeavors, and demonstrated ongoing service to the community and the University.

An active member of the community, Mr. Jones volunteers on the Board of Directors for nonprofits Main Line Deputy Dog, the Philadelphia Fireman’s Museum, and Turning Points for Children. He is also an active volunteer with the American Red Cross of Eastern Pennsylvania and Villanova’s Office of Disability Services. 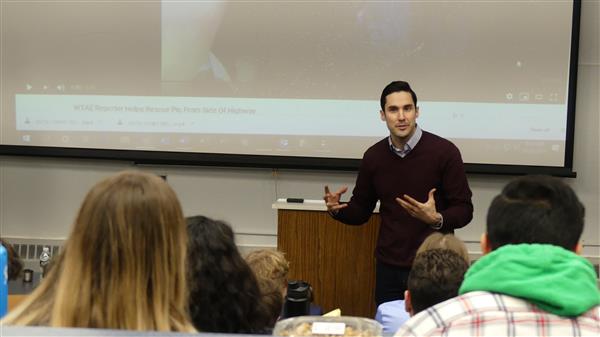